The Cathedral of Casale Monferrato 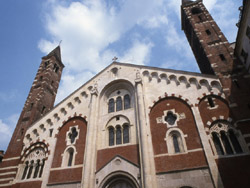 The Cathedral of Casale Monferrato, a very ancient church, which was dedicated to St. Evasio, is a jewel of Gothic-Romanesque architecture. The construction of St. Evasio Cathedral began in 1108 (the year of its consecration) and continued till the nineteenth century, period in which was decided the demolition of the structure. Thanks to the archaeologist Luigi Canina, who managed to change the project of demolition into a significant restoration, the Cathedral was saved. There was a remake of the large asymmetric gabled façade with a series of single-lencet windows and two- or three-mullioned windows. The structure is tightened between two tall pointed bell towers, with different height.

At the entrance we can admire the magnificent narthex, one of the rarest in Italy. With its nine compartments it is considered a static masterpiece and unique in Italy for its Armenian and Islamic architectural features. The Cathedral conserves its original structure of the XII century, with five narrow naves.

On the right hand side, the first Chapel hosts a marble group with Mary Magdalene in Ecstasy (XVIII cent.). On a small column there is the monogram of Christ, which indicates the point, where St. Evasio should have been martyred (the legend hands down that leaning a ear at the column, you can hear the flow of the saint's blood).
On the right hand side of the transept is the Chapel of St.Evasio, designed in 1793 in a elliptical style. It dates back to Baroque period and shields the remains of the patron saint of the city, stored in a sliver statue, which was rebuilt many times due to profane thefts. 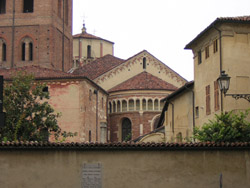 The chapel's paintings depict moments of St. Evasio's life, who preached in Casale in the VII century and was decapitated on the parvis of the church, founded by him. On the inside of the church, in the central nave, a big wooden Crucifix in Romanesque style is hung, covered with sliver foils of the XI century. The frescoed apse represents figures of angels, saints and a blessing Christ. It was made by Costantino Sereno from Casale.

It is also remarkable the eighteenth century high altar as well as the rococo choir, over which Guala's portraits are conserved. Finally, the cathedral of St. Evasio hosts, in the back part, a well-equipped museum with art works of absolute value. We can find mosaics, gold-workings and textile artefacts, which contribute to enlarge the wonderful artistic wealth of this construction.

On 12th November, the patronal feast of Casale Monferrato, the citizens celebrate the return of the saint's relics (which were stolen by the citizens of Alessandria after the destruction in 1215 but returned in Casale in the XV century), with the traditional distribution of rooster-shaped pastries.

The museum itinerary and sacristies

The frescoed apse and the bell tower

The Chapel of St. Evasio

The column where St. Evasio should have been martyred

The Crucifix and the apse

The Chapel of St. Evasio