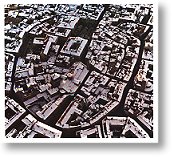 The old capital of Monferrato is one of the most interesting art city in Piedmont.

Casale Monferrato has been defined as "a Baroque city" for the many palaces and churches  with a quality interior, which was restored at the age of the Baroque. Nevertheless it has many attractions, which belong to every epoch.

The Romanesque cathedral (XII and XIII century) is one of the oldest monuments of the city and it dates back to the time of King Liutprand. Inside we can admire a lot of precious goods, like the wonderful Crucifix of the XII century, the Narthex in the Armenian style and the magnificent mosaics, part of the original mosaic floor.

If you are in Piazza Mazzini, where the equestrian statue of Carlo Alberto is situated, you can already see the civic tower (Torre Civica). Situated next to the seventeenth-century Santo Stefano church, it is the symbol of the city.

The San Domenico church (XVI century) hosts paintings of Pietro Francesco Guala, and the San Filippo Neri, Baroque church, is one of the most interesting works of Sebastiano Guala.

You can also find the San Michele church (or nobles' church), characterised by an octagonal plan form, with high cupolas and paintings of Guglielmo Caccia, called Il Moncalvo.
Santa Caterina is a Baroque church and has beautiful frescoes.

The big synagogue is particularly interesting. It was built in 1595 and still has right inside the jewish art museum, with unique pieces. 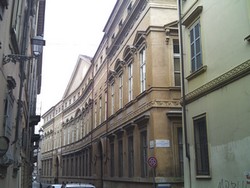 The palaces San Giorgio, Magnocavalli, Treville and Sannazzaro are wonderful examples of Baroque art. On the other hand Bartolomeo-Baronino and the palaces Anna  d'Alençon and del Carretto are historical structures of Gothic style.

In Piazza Castello, where there is the castle of Monferrato, takes place the town theatre (Teatro Municipale-1791), which has been recently restored.

The civic museums are situated in the ex-cloister Santa Croce, where we can still admire the fifteenth-century courtyard. On the ground floor there is the plaster casts gallery  "L. Bistolfi", which is made up by over 180 works of the same artist. Finally, on the first floor there is a picture gallery, with textiles, ceramic objects, sculptures and paintings.