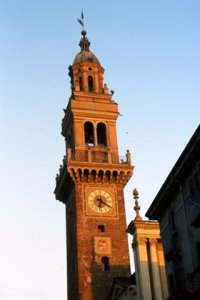 The civic tower is a brick construction with a square plan form. With its 60 meters of height the tower dominates the whole town and it is its most characteristic symbol. The lower side dates back to the original construction of the XI century. It was built for defensive purposes later it became the symbol of civic power. At the beginning of the XVI century the Paleologi family, Marquises of Monferrato, commissioned to the architect and sculptor Matteo Sanmicheli (Porlezza 1480-1528) a crowing element, which takes the form of a loggia. With a square plan form the loggia presents four mullioned windows, surmounted by another smaller loggia with an octagonal plan form. On the top of the tower stands a colonnade and a small calotte, adorned with dolphins. Across the centuries the civic tower was modernized with painting plasters and decorative stucco. In 1920 there was a final restoration and so it has remained until today.

The civic tower
Via Saffi The civic tower by night (nineties) The civic tower and the Santo Stefano church The civic tower by night