The Castle of Casale Monferrato 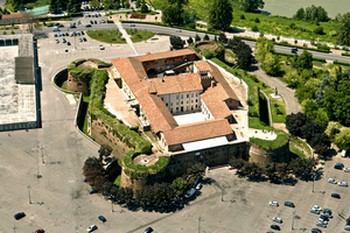 An outline of history:
Giovanni II Paleologo, Marquis of Monferrato, ordered to build the current castle and the work continued till 1357.
When Casale assumed the role of capital of Monferrato's marquisate and obtained in 1474 the title of city, also the castle, seat of the court, changed its aspect following the restoration with the Marquises Guglielmo VIII (1464-1483) and Bonifacio V (1483-1494).
When Giovanni II Paleologo died, the Gonzaga of Mantova took charge of Casale. Because of the new military techniques the castle was reinforced. They strengthened the walls  and the plan form was modified, becoming hexagonal (we can still see it). The towers were reinforced too and four new ravelins were added. At the beginning of the XVII century the castle returned to assume the role of seat of the court: indeed, the Dukes of Mantova, busy in frequent negotiations with Savoy, sojourned there. Later it became the principality of the Duke Carlo II Gonzaga-Nevers (1637-1665), who many times was there in vacation with all his court, giving a considerable impulse to the elite and cultural life of Casale.
With the crisis of the Gonzala's dynasty, the castle was about to face an unstoppable decline. The city fell into Savoy's hands in 1708 and the castle became a barracks.
In the middle of the XIX century Casale was fortified in preparation for a war against Austria and the castle became a defensive structure. The state of Savoy decided to demolish the eastern ravelin, which pointed towards the city allowing the creation of an extended public area (today's piazza Castello). The municipality designated this area as an open-air market zone. With the advent of the Unity of Italy the other three ravelins were demolished too, because they were unnecessary.

Aerial photograph of the castle

The courtyard of the castle